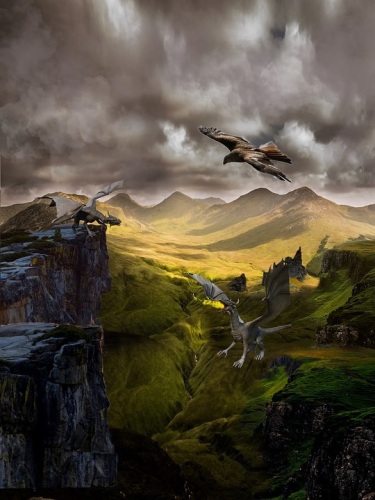 Whether it’s Earth or Azeroth, there’s no better way to travel than to do so way up high. And although there’s the option to teleport, nothing competes with being on your own WoW mount riding through the clouds while looking down at the utterly fantastical world below. In true World of Warcraft fashion, you’ll have to unlock this ability. If you’ve been playing for quite some time now, you’ll know right off the bat that this is a tedious task. The same goes here in World of Warcraft: Battle for Azeroth.

Just as it was in Legion, there are two achievements that you need to accomplish in order to gain access to the skies. But for now, only one of the two is currently available, which is Battle for Azeroth Pathfinder: Part One, so you’ll just have to go with that.

Like in Legion, to unlock the achievement in question, you need to unlock a handful of other achievements first.

First on the list is the Battle for Azeroth Explorer, which requires players to explore the following areas:

Next would be the achievement Azerothian Diplomat, which requires to earn Revered status with certain factions. For Alliance, that would be the Proudmoore Admiralty, Order of Embers, Storm’s Wake, or7th Legion. For the Horde, that would be the Zandalari Empire, Talanji’s Expedition, Voldunai, and The Honorbound.

Note: Both factions must earn Revered status with Champions of Azeroth and Tortolian Seekers.

Another necessary achievement is the Wide World of Quests. This requires you to finish 100 World Quests in KulTiras and Zandalar. It’s pretty tedious, but hey, it’s the lofty price you have to pay for you to soar up high. Besides, once you’re done with this achievement, you’re pretty much set for life, as this is an account-wide achievement. The same goes for battle for Azeroth Explorer and Azerothian Diplomat.

After that would be Kul Tourist for Alliance and Zandalar Forever! for the Horde.

For Kul Tourist, you’ll need to achieve the following achievements:

For Zandalar Forever!, you’ll need to finish more achievements compared to Kul Tourist. But hey, you’re part of the Horde, so you’re tougher than those puny Alliance do-gooders anyway.

These achievements are as follows:

Once you’re done with all those achievements, it’s time for the last one: Ready for War.

For the Alliance, you need to accomplish the following campaigns:

As for the Horde, it’d be as follows:

These achievements are, unfortunately, not account-wide. Which means you’ll have to do them all over again for another character. But with Azeroth Pathfinder, Part One, the only reason to get them for your alternate characters would be for completionist purposes.

After accomplishing all those achievements, congratulations! You now have Battle for Azeroth Pathfinder, Part One. Aside from being halfway to having a flying mount, you’ll be rewarded with 20% Increased Mount Speed in KulTiras and Zandalar.

Blizzard usually releases an expansion once every two years. That is, up until Battle for Azeroth was announced, which is slated to be launched in November of this year, while they just released Legion a few months ago. Despite the short time between the two, it seems like it was enough for Blizzard to plan and create enough content in order to ensure that the going on fifteen-year-old MMO remains fresh, enjoyable, and relevant.

New things for every expansion, including WoW Mounts, however, depends on the direction of the game’s story and its core theme. For the Battle of Azeroth, the conflict is at the heart of everything and is the very heart itself. After years of factions being reduced to a mere lore-related player detail that’s determined by race, it is going to once again become an important determinant of one’s fate in Azeroth, as Blizzard will be fanning the flames of war once more between the Alliance and the Horde. It is a brilliant move, as it propels the game forward, while at the same time taking it back to its roots, perhaps even further than Legion did.

The best new feature that represents Battle for Azeroth would be the Warfront Mode. Warfronts are 20-player PVE missions that look and feel like a real-time strategy game, just like the original Warcraft games, except that this time, you are the heroes leading the charge and turning the tides of war to your advantage on the ground rather than giving orders from a birds-eye view.

Aside from the fact that it will be very reminiscent of the old Warcraft games, Warfronts will be rotating between the two factions. For example, Alliance players would first hold Stormgarde Keep, and after that, the Horde, after gaining enough resources, will lay siege on it. Stormgarde Keep, an old vanilla WoW zone, brings out the feeling of the old times even more.

Going back to the Warfronts mechanics, the opposing faction, after the victory of the other, can launch a counter. It is an eternal back-and-forth battle, and the good part is that if you are not the competitive type, it is PVE and not PVP, so launching a Warfront is a guaranteed victory. That means nobody loses, everybody wins, everybody gets rewards, and nobody will be angry about the other faction.

Do know, however, that a lot is not yet known about Warfronts. Since we are still a few months away from launch, a lot of the mechanics and small details can still change, so be ready.

Aside from a new PVE mode, PVP will also be seeing a change, as the World PVP will be replaced by War Mode. That means that the old mechanics of players being able to attack other players in servers that have their World PVP will be phased out for the new one. This time around, World PVP will be turned off by default. So, in order for players to participate in this version of World PVP, they will have to go to the capital city of their respective factions, and choose to turn War Mode on or off.

If you turn it on and go to the open world, you will be able to attack players from other factions and vice versa. It is not required to try your hand at War Mode, but those who successfully make kills will receive extra experience and Azerite Power.

Warcraft: Battle for Azeroth is not just about reigniting the strife between Azeroth’s two halves, but about changing how the two wage war against one another. Hopefully, both the Alliance and the Horde are ready for these new stages of combat.